The bundles of ivory tulle put me off immediately. Too soft, too marshmallowy, too princess-like. “I want to wear red,” I said, folding my arms.

The designer raised an eyebrow. Oh yes. “Any particular style?”

“Halter-neck. Morticia Adams long. Painted around the bottom by a local artist.”

She looked at me as if she’d never heard of the red-morticia-halter neck-painted category of wedding dress before. I knew what I wanted, or thought I did until I tried it on three weeks later. I looked like I was wrapped up in a gigantic red carpet. Just lay me sideways and I’d unravel down the hallway.

That designer was intuitive—like horses are when they know not to cross a broken bridge—so she said nothing, and then called two days later. “You can’t do it can you?”

Tears brimmed. I wanted to be the kind of woman who strutted boldly down the stairs to meet her groom in head to toe SCREW YOU TRADITION but I wasn’t. I wasn’t sure what I was.

White was never the traditional colour for brides. Originally it was blue in honour of the mysterious Mary who had a son yet remained a virgin. After the Dark Ages, red was a common choice for brides. It was also a common belief that an evil spirit could possess the bride at any moment before the nuptials but fortunately those evil spirits were colour blind so they used to dress the bridesmaids in the same style frock but different colour, hoping the spirits might possess the bridesmaids instead. We’ve all been to weddings where this has happened. They’re usually the best, especially when evil spirits have also entered the groomsman and best man.

Later, when the designer had me in a silver halter-neck, not painted (and not enough Morticia in my opinion) she told me that every single bride who walked through her door wanting to get married in bright orange or red or pink or yellow didn’t make it to the altar, or the dress didn’t made it to the wedding.

For the second wedding, that I was totally ready for, we didn’t have time to get a dress made because we got married in a week so we could move to a forest in Northern California. Everything was borrowed including the ring from my late Grandmother Ivy. The dress, by Nicholas Blanchet, had an interesting back but the front, upon reflection in the photos, was like a sack. A nice cream one but a sack nonetheless. And I don’t even like cream.

Now I have photos of me in silver getting married to the wrong guy and me marrying the right guy in a sack that’s all wrong. I don’t know why this disappoints me but it does. I can’t figure out whether it’s because I don’t think about what I want until after I discover that wasn’t what I wanted—I can’t choose a duvet cover let alone a whole outfit that I will forever be framed in on the bookshelf—or I don’t let myself have what I really want, I’m scared to ask for it. It seems crazy because what’s the worst that can happen? I get what I want.

After pondering this one day in the forest, it struck me what I wanted.

I wanted a bride photo I liked. That was it.

I wanted my-pass-down-the-line photo that my great great grandchildren would have one day and go ‘there she was, that was her’. Traditionally, the wedding photo gets handed down, assumed to be the moment when a girl becomes a woman (really it should be the photo after we’ve given birth but we generally don’t want our dang photo taken at that moment so the nuptials it is). I didn’t need another wedding, I didn’t have to own the frock, I didn’t need bridesmaids to get inhabited by evil spirits but I wanted a photo I liked.

“So you want a photo of you as a bride but you don’t want me in it?”

Yes. Twice, I accidentally didn’t feel like a bride even though I love you and I love it that we’re married, I want a photo where I feel elegant and fabulous. And not in a sack.

Fortunately he got it that he didn’t need to get it.

A frock was borrowed and three girlfriends, Kristi, Alicia and Priya, came over to work on hair, make-up and the most important part—pouring champagne. They also brought their partners, one of which happened to be a talented photographer.

Slowly they created something out of nothing. Preening, primping, curling, straightening, blushing, smoothing, and laughing, they prepared me like an Indian bride. Time bubbled by. We had such fun nobody noticed the minutes slipping past so by the time we went out to get the shot, sunset was upon us so we had to race up the hill to get the last of the rays.

And the mozzies were out so it was nearly impossible to stand still and every time I looked at my photographer friend, Pablo, his head was covered in the hungry mites, which made me smile too much.

We ended up sprinting away from them.

And this is now my favourite bride photo, the one I will pass down to the great grandchildren. Dress hitched up, legging it through the trees running away from tradition. 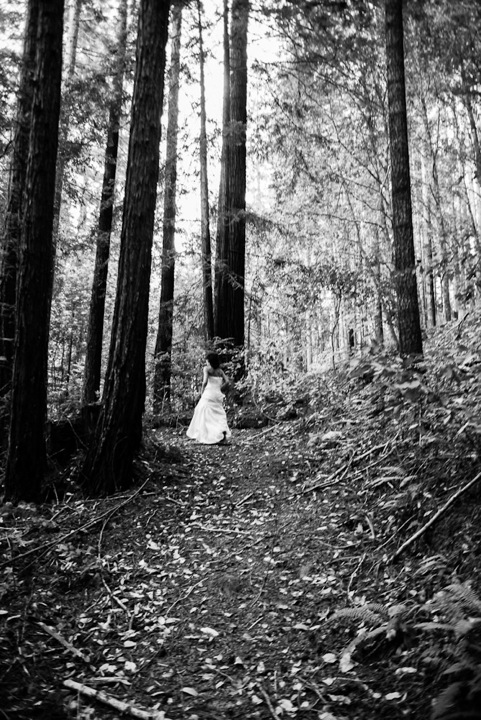 Because I’ve finally figured out that’s who I am.

8 thoughts on “Tell Me What You Want, What You Really Really Want.”

Writer. Wig wearer. Bad dancer. Basically, extremely dangerous. When I’m not ranting here about something rummaging around in my head I’m a brand storyteller and speaker-up-er of messages bombarding young girls on body image.

Other Words From Me