The Worst Diet Ever Invented Is About To Get Its Ass Kicked.

Last year, Paula Penfold asked me to share my bulimia story for a TV show and I said, “Sure, but do I have to tell my story? How about I help find other people’s stories.” That felt better. I didn’t want my story put up for people to rip down, especially on national television.

Recently I went to a talk by professor Cynthia Bulik. This firecracker biologist, psychologist and PHDist has dedicated her life to understanding the strange disorders that involve eating, or lack of. She should be up for a Nobel peace prize for the work she’s doing investigating the genes associated with eating disorders but nobody wants to acknowledge it. It’s still such an unsexy subject. Her goal is to see people ticking eating disorder just as easily as they tick asthma on forms.

She’s got a lot of work to do.

But I don’t want to be an advocate for eating disorders.

I’m happy to be a pair of ears sharing stories over on FABIK (Fucking Awesome Bulimics I Know) but not an actual person, not a bulimia poster girl. Then Cynthia shared this fact: eating disorders have the highest mortality rate than any other.

It is such a clanger it’s worth repeating.

Eating disorders have the highest mortality rate than any other psychiatric illness.

And it’s not getting better, it’s getting worse.

Georgia O’Keeffe said once, “Whether you succeed or not is irrelevant. Making the unknown known is what is important.” That’s another clanger.

If Cynthia, who has witnessed first hand that mortality rate, can talk on national TV like she did this week on Paul Henry, then I can talk too. I’m listening to the mother of American modernism and I’ll help make the unknown known.

This was me on the left, age 9, with my best friend Hilary.

I used to tell people she was a prem baby to explain our size difference. I didn’t even know what a prem baby was but I had heard it meant you were unnaturally small. Which meant I wasn’t unnaturally big.

Research shows around 60 per cent of people with a family history of eating disorders develop one. Yet while genes load the gun, it’s environment that pulls the trigger.

And one of those triggers is a diet.

Not long after this photo I went on my first diet because I was uncomfortable in my skin. I remember it well because I couldn’t eat the sausages and stewed apple and custard my brother was eating.

This is me at 13. I spent quite a bit of time dieting by this stage and I was good at it.

I was a professional dieter and I used to do exercises in my room when I was meant to be in bed.

Boys started paying attention to me because I wasn’t chubby any more and I liked that.

And I loved that pirate shirt.

Here’s the thing about diets. If you have a history of food struggles, binge eating, restricting or an eating disorder in your family, then putting your child on a diet might trigger the same behaviour. And that’s a hefty might. If children have the biological predisposition (genes) to develop an eating disorder but are never put on diet, it might never happen.

This is not about my parents, they were wonderful. None of us knew the dangers of restricting food back in the 80s when diets were as popular as big hair. But what we know now is that we must never ever put children on diets to manage weight.

I was asked to model a few times but I was told by a sleazy photographer that I didn’t have a good gap between my thighs.

This was before the thigh gap even existed.

It’s possible that photographer and I invented the thigh gap right then and there.

Smoking and drinking was way more fun than posing.

Here’s the university flat where I first threw up. I was 19. Freshly dumped, my life and body felt out of control and I was miserable.

The toilet seat was salmon pink and I told myself it would only be once. I’d just get rid of that second bowl of pasta because I was sick of dieting and trying to control my weight and food. I was so sick of it I made myself sick. Which might sound totally sick but it seemed like an OK idea at the time.

At least it was my idea.

Many people think eating disorders are about bodies and food. They are. But also they aren’t. They are about trying to control what feels like an out-of-control life. Food, whether having too much or too little, happens to be the means, but the triggers are emotional.

Here I am at 20, visiting my parents.

By now I had full throttle bulimia but you wouldn’t know it. Eating disorder sufferers, particularly bulimics and binge eaters are good at hiding.

Beneath this smile I was wretched, bingeing and purging food every day. In one flat in Wellington I used to throw up in the yellow washing basin my mother gave me to do my hand washing in. Then I’d throw it all outside. No flowers grew outside that flat but we didn’t care. We were young and wild.

Eating disorders are affecting men now, lots of men. The average age for anorexia for boys is 11. Transgender are at significantly higher risk too. Anorexia’s less common in Latino, African-American, Maori and Pacific Island communities but binge eating and bulimia is growing rapidly amongst these groups.

Purging is heritable in twin studies.

This is me at 22, home from university again. God I loved that red jersey because it hid all my shame. I’m with my amazing brother, Shaun.

He didn’t know. Not then.

I can’t explain the posy of flowers but I can explain the distracted, rosy-cheeked look on my face.  That was after a spending too long upside down over a toilet bowl – it made my face puffy.

These are the side-effects that come with bulimia: low self-esteem, shoplifting (yes that’s another story and explains A LOT), anxiety, obsessiveness, low self-worth and isolation.

Eating disorder mortality rates are higher than depression, and there’s a super high correlation to suicide. The average suicide rate is a bit below 2% of the population. But for bulimics it is 13%. For anorexics it shoots up to 18%. That’s another statistic that’s worth repeating.

The suicide rate for anorexics is 16% higher than the national average.

I loved drugs. They made me feel numb.

Problems with drugs and alcohol are another bonus side effect.

Diet pills, speed or ecstasy made me not eat or not think about food for 24 hours because in my head the dialogue about food was always there.

For people with eating disorders that’s the thing that drives us nuts. The constant dialogue in our brains about how much we’ve had, what we’re going to have, what we’re not going to have, I’ve written about it before. For anorexics that’s what makes re-feeding so hard, it’s not that they don’t want the food, they don’t want the noise in their brains that comes with the food. 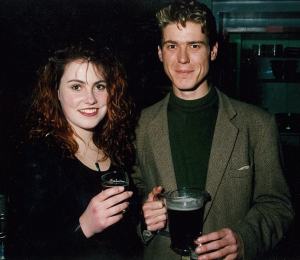 My weight went up and down because bulimia’s a sham, it is not a good diet.

I had scars on my knuckles (you can see the blemish on my middle knuckle on my right hand).

This was my friend Steve. He was a good guy so naturally we didn’t date.

I went for the bad guys and if they had their own dirty secret then even better.

In fact I married somebody who had his own addiction, which kept him distracted from my late night antics.

My girlfriends told me I was too thin the day I got married (that’s my friend Julie to my left and my amazing Mum on the right).

They also told me I was marrying the wrong guy.

Women with low self-esteem attract what they think they deserve. I didn’t think I deserved love; I felt so ugly on the inside.

And I was still throwing up. Not every day, about once a week. Every time I felt anger, hurt, frustration or sadness I binged and purged it away. It was my own trick to deal with emotions I didn’t like. It was my own bottle of whiskey. It was the one thing I could control.

Emotionally, you stop developing at the age your eating disorder begins, and then you have to try and pick up after you come out the other side.

When I was finally free from bulimia aged 30, I could no longer be with the other addict. It took me two years to leave.

I can’t explain the blue light or why I’m having a much wilder time than everyone else in the room.

It took me years to find peace with the body I’ve been given.

And I’m still not 100% fixed and shiny and new. Recently I wrote a story about why we still see super thin models and before I sent it I found myself standing at the fridge eyeing up the Tim Tams. I told those Tim Tams that if I spoke up about her weight people would point fingers at me. She had bulimia so of course she’s on her high horse. God, she must be vain if she had an eating disorder…

The Tim Tams ignored me. So I ate some anyway and fired off the story.

It’s still with me somedays.

More than half the people Cynthia sees in her US treatment centre are over 35. She conducted a study in women over 50 years and found 8% were purging, over half claimed weight affected them, and 41% were body checking every day. They were checking to see if they were still OK. Every day.

So here I am, saying something.

Something needs to change.

So many suffer. And nobody wants to talk about it. People think eating disorders are easy to get over. They are not. Nobody wants their child going through an eating disorder yet we all pretend we left them behind with Flock of Seagulls. We didn’t.

Cynthia needs people who have, or had, anorexia to volunteer for the world’s largest survey into investigating eating disorder genes. Compared to other psychiatric disorders like depression and schizophrenia we’re behind the eight ball in terms of understanding genes linked to EDs. You can blame that on the stigma. She needs 13,000 people worldwide. After anorexia, they will investigate bulimia and binge eating disorder.

Please pass this on to mothers and daughters and aunts and sisters and brothers and cousins. People can sign up here at ANGI.

Because hopefully one day it won’t be the most shameful thing to tick on a list.

PS. Apologies Paula Penfold, I wasn’t brave enough to do this last year.